Syria: what I told my MP 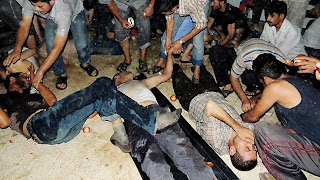 My MP asked constituents for comments before the Syria debate tomorrow.  I responded:

You have expressed all my concerns.   My instinct is that we should not intervene because of the difficulties of any military option, the risk of making things worse rather than better in Syria and the consequences for relations between the Islamic world and the West.    The Middle East today is like Europe in the sixteenth and seventeenth centuries (but with modern weapons) and we dabble in their religious wars at our peril.   Above all, Liberal Democrats should not support action without a UNSC resolution.  That was our stance over Iraq and we should stick to it.  One final comment - I understand that the UN Secretary-General is seeking more time for the chemical weapons inspectors to do their work.  Sounds strangely familiar.