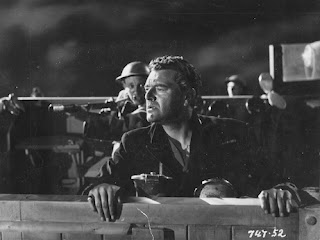 I confess to a liking for Second World War films.  I just watched The Cruel Sea.  Some years ago at a dinner in Brussels I met Frau Von Moltke.  Her husband, a Director-General in the European Commission, was at the other end of the table.  I asked if he was related to the general.  "Which one ?", she asked and then added "actually he's related to all of them."   Relations of his had fought in the Franco-Prussian War, the First World War and the Second World War.   Of course, so had members of my family (except the Franco-Prussian).   Generations of Europeans have died and killed each other in war for centuries.  Their descendants have tried to build something better.

It makes me so angry to hear the nationalist bollocks of UKIP and their friends in the Tory Party.  It also makes me angry to hear the half-hearted, luke-warm, grudging comments of British so-called pro-Europeans.  How do they imagine we can build peace without the European Union ?  For pity's sake, let's learn from history, stop moaning and get on with working for peace in Europe and the world.
Posted by David at 5:15 pm

Spain is different. We don't have the nationalist bollocks of UKIP but in Catalonia we do have the nationalist bollocks of CDC and ERC, which want to get us out of Spain with exactly the same kind of popularist rabble-rousing that UKIP employs in Britain. They say that they want to stay in the EU, and some of them actually mean it (or believe it), but that is a question that is no more settled than it is in the case of Scotland. Catalan nationalism mirrors UKIP more than the SNP.

CDC is a full member of LI and ALDE, which is an absolute disgrace. I have made my feelings on that matter known over the years but nothing is done.