Keynes, thou shouldst be living at this hour 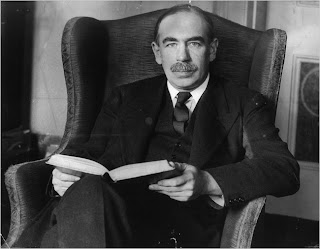 At the Liberal Democrat conference in 2011 Jeremy Browne, MP for Taunton, was heard to say, "We have taken down the picture of Keynes in the office and put up one of Gladstone".   If it were only the picture !    At the time, I thought Keynes knew a little more about economics than you Jeremy.   It seems now that the Financial Times agrees.   In case you can't get past the paywall, here's a quote:


The lack of growth in the austerity nations should have come as no surprise, with monetary policy transmission channels clogged and the global nature of the slowdown keeping exports weak. In a balance sheet recession banks want to shrink their loan books and consumers want to rid themselves of debt. The role of government at these times is to support economic activity until excess consumer debt has been worked off and a sustained recovery has taken hold, even if this means a higher public debt burden in the meantime.
This is what makes the UK’s latest moves so puzzling. In stoking up a housing boom policy makers are doing the exact opposite, tempting a new generation of consumers into debt in the hope the government can improve its own financial position.

A more supportive fiscal policy would have meant an earlier and less unbalanced recovery. The sales tax would not have been raised, slashing real disposable income early in the recession. Major infrastructure programmes could have boosted the supply side of the economy while creating employment and demand.


The lateness of the UK recovery comes at a cost. The long-term unemployed have lost valuable skills and economic stagnation has seen an unnecessary further rise in government debt.
Posted by David at 10:07 am

This is a guest article by an investment manager - though it does follow the logic of more established FT commentator Martin Wolf up to a point. It suffers from macroeconomic blindness - the belief that economic aggregate statistics are all you need to know about reality - something the great Keynes would not have suffered from.

In fact Britain was running a big trade and current account deficit in 2010 and the economy was badly unbalanced. The argument in favour of austerity is that all extra government deficits would have done was taken us back to an even more unbalanced situation and another bust, this time based on unsustainable government debt rather than unsustainable bank debt. What Keynes would have made of it, who knows?

He's a complete waste of space Jermey Browne that is, not Keynes... ;)