The block on the rock 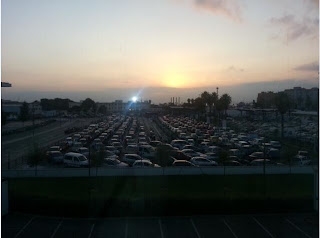 It strikes me that the Spanish government's current tactic of delaying crossings at the frontier of Spain and Gibraltar is illogical.   If they maintain that Gibraltar is part of Spain, they should remove all frontier controls.

People who often question the role of the EU in maintaining peace in Europe are missing the point.   The dispute over Gibraltar is a small example.   Traditionally such disputes were resolved by force of arms. Today the argument is referred to the European Commission and the European Court of Justice.
Posted by David at 9:14 am

Remove frontier controls and then what? Send the military, police and civil service in to run it? I think that that would provoke the first armed conflict over Gibraltar in more than 300 years.

Spain is perfectly entitled to make border checks because Gibraltar is not in Schengen, just as there are passport controls between the UK and Spain (as I very well know). The question is whether they are proportionate. Spain contends that they are because of massive tobacco smuggling, which has increased greatly in recent months as the price of tobacco in Spain has shot up. There is a similar problem with Andorra (where tobacco is grown) and lengthy border checks are commonplace there.

The root of the problem is that the British media only tell a sanitised version of Gibraltar. The real problems are not just access to, and control of, the Bay of Algeciras but the ecological aspects, of which the bunkering is just a part. And of course the scandal of the airport. And if you’re not sure what I am talking about, I have proved my point. Not to mention the status of Gibraltar as a financial parasite and the 7,000 patriotic Gibraltarians,including the Prime Minister, who prefer to live in Spain without paying a penny in tax.