Nelson Mandela - how times have changed 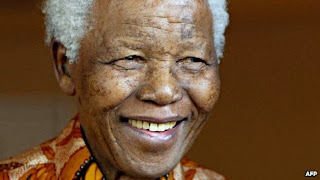 "The ANC is a typical terrorist organisation ... Anyone who thinks it is going to run the government in South Africa is living in cloud-cuckoo land" - Margaret Thatcher, 1987

"How much longer will the Prime Minister allow herself to be kicked in the face by this black terrorist?' - Terry Dicks, Conservative MP, mid-1980s

"A great light has gone out in the world. Nelson Mandela was a hero of our time. I've asked for the flag at No10 to be flown at half-mast." - David Cameron, 5th December 2013

Quoting Teddy Taylor as if he was ever representative of the Conservative Party is bad enough, but to give us Terry Dicks as well, that's far below the belt! Wasn't he nicknamed "Neanderthal"? But, as the Thatcher quote shows, this was a mainstream attitude among a certain type of Tory, and the Cameron quote shows that, thank goodness, it now has no place (officially, at least) in the higher echelons of the party, which I hope everyone will welcome (even if he is almost as inept at his job as his three immediate predecessors).

Peter, so sorry I didn't publish your quote sooner. I wasn't surpressing it. I just hadn't looked at the blog for weeks.