Changing my vote to Tim Farron 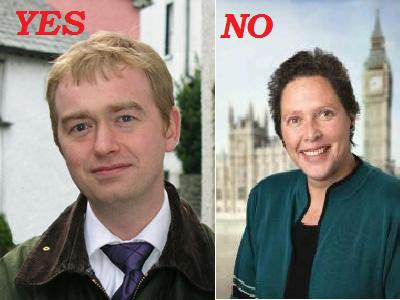 Tim Farron has made it clear that he will keep his pledge to vote against increasing tuition fees, despite no doubt pressure from the leadership and the whips to support Vince's terrible compromise. Susan Kramer, under no such pressure, made clear on the Week in Westminster this morning that she will support Vince. I nominated Susan because I have long believed that an MP should not represent the party membership as conflicts between party and parliamentary loyalty will inevitably arise. Both are good candidates but Tim has shown his independence and Susan her establishment credentials.
Posted by David at 12:00 pm

Welcome to "Team Tim" David!
However, whilst I respect Tim's position on this issue - and indeed that of any other backbench MPs who intend to vote similarly - I for one have changed my view of the party's policy. I believe that Vince has negotiated the best possible deal for part-time students, and those who will find themselves in lower paid jobs.