Mr Gladstone travelling on a bus 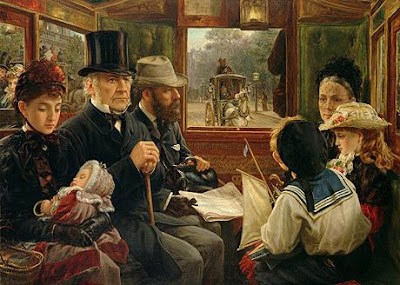 A request from my old friend Jonathan sends me to the bookshelf to check "The Liberal Party" in the Britain in Pictures series. The link takes you to the whole book on-line but I cannot resist quoting Lord Woolton at Birmingham, in March 1947, who said, "There is a great liberal sentiment in this country. There is now no major issue between Liberalism and Conservatism. They are both expressions of the same political philosophy, and those old battles that used to enliven political life in the days gone by, between Liberals and Tories, are now just ancient and meaningless feuds."

How sad ! How, I declare, untrue. Perhaps some of our Liberal Democrat ministers should take a ride in a bus occasionally.
Posted by David at 9:35 am