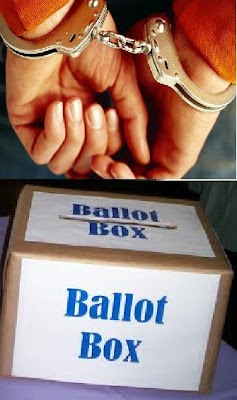 Listening to the radio today is getting very bad for my blood pressure. Is there anyone left in the leadership of the Liberal Democrats who actually understands Liberalism ? I waited in vain for a Liberal view on this question on Any Questions. Stupid of me to expect it from Michael Moore. Shami Chakrabarti gave it on Question Time on Thursday, not Jeremy Browne. Even the callers on Any Answers expressed more Liberal views !

Voting is NOT a privilege but a fundamental right. Removing the vote is akin to the mediaeval practice of declaring a person an outlaw, someone who loses their legal rights. We want to reform criminals. It isn't easy but why stop someone from showing a modest degree of social responsibility by voting ?

Removing the vote has NO deterrent or punitive value whatever. Who is going to say, "Oh, I don't think I'll murder my wife, I might lose the vote if I do that".

Some panellists tried to argue that you shouldn't lose the vote for certain crimes, e.g."crimes of conscience". What the hell does that mean ? Protesting at a nuclear base may be seen as a crime of conscience. What about the girl who tried to kill an MP because he voted for the Iraq War ? The action was worse but the motive was a matter of conscience. Who would decide what counts ? You couldn't let that be decided by politicians.
Posted by David at 1:59 pm