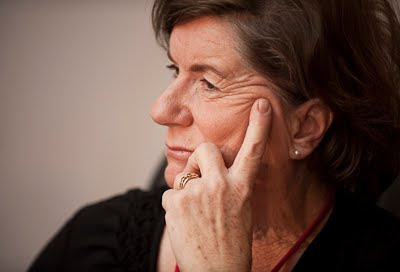 Jenny Tonge spoke on conflict prevention in the Lords debate on the Strategic Security and Defence Review on Friday. She referred to Israel's treatment of Palestinians and, as ever, a well-organised media response condemned her. It is instructive to see how by slight textual changes her meaning was misrepresented. You may say that Jenny should choose her words more carefully but to what purpose if her actual words will always be twisted against her ?

She said:
"Prevention of conflict also means that we must start being honest about international law and UN resolutions. It is a disgrace to us all that problems such as Kashmir and Palestine are still alienating Muslims all over the world. The treatment of Palestinians by Israel is held up as an example of how the west treats Muslims and is at the root cause of terrorism worldwide." [My emphasis]

In the Jerusalem Post report, this became:
"Jenny Tonge claimed on Friday that Israel’s treatment of Palestinians is the root cause of terrorism worldwide.".[My emphasis again]

and the headline was:
"British politician: ‘Israel is the root cause of terrorism'"[my emphasis]

Subtle but significant changes in emphasis so once again Jenny is attacked for what she did NOT say. Any British politician who dares to criticise the Israeli government's policies and conduct is immediately labelled anti-Israeli and often anti-semitic. Jenny herself went on to say:
"I feel sorry for the people of Israel sometimes. Their Government's policies have made that country the cause of a lot of the world's problems..."
Posted by David at 10:22 am