"I believe it's time for promises to be kept" - Nick Clegg 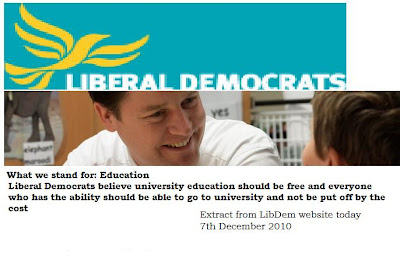 It may or may not have been foolish for any MP to sign the pledge on tuition fees. Most did it fully believing in it. Our party had debated the issue and refused to downgrade our opposition to tuition fees to a mere "aspiration".

I am not so sure about the motives of at least two of our coalition negotiators, David Laws and Danny Alexander. David never liked the pledge and signed it very reluctantly. Danny Alexander had already concluded in March that we would not be able to honour the pledge if entering a coalition. Yet both campaigned in the election on the strength of the pledge. The coalition agreement recognised the difficulty by allowing for abstention, but then Vince Cable negotiated a deal which his colleagues could not accept. It's not the first time Vince has developed policy without much regard for his colleagues.

What I don't understand or accept is the argument that Shirley Williams made on WATO this lunchtime which is that we cannot afford to continue state funding of universities at the current level. Replacing this funding by loans and grants doesn't save a penny in the short to medium term. In the long run it may turn out expensive too not only for the graduates but for the government if the default rate is high or many graduates finds themselves unemployed or on low incomes.

So raising tuition fees will not save money in the short term in which the government insists on cutting the deficit. One can only conclude that the policy is for the long term, which means that Vince and those who support his policy have abandoned the party's stated policy, still on the party's website: "Liberal Democrats believe university education should be free and everyone who has the ability should be able to go to university and not be put off by the cost.". What are the chances that when the government sells off the banks, the proceeds will be used to abolish tuition fees or will they simply be applied to offering tax cuts at the next election ?

Finally, let's remember Nick Clegg's pitch on new politics at the General Election. Here's what he said in a PPB as he walked along a street strewn with broken promises by Labour and the Conservatives:

"I believe it's time for promises to be kept. We can say goodbye to broken promises"
Posted by David at 4:23 pm

Well, everyone who has the ability will be able to go to university and should not be put off by the cost as they won't need pay until they're more than able to.

As for 'free', I'm not sure how that bears under scrutiny. Free as in payed for by those that don't go to university? Or free as in graduates pay through income tax?