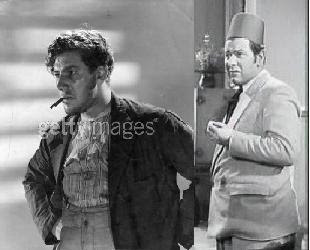 The answer to the film quiz was "The Way Ahead" also featuring David Niven, Stanley Holloway, William Hartnell and many others. I suppose nowadays it would have been titled "Going Forward". The other film in which Ustinov was a North African innkeeper was "Hotel Sahara".

Congratulations to John Leston who got it first and to Hoonaloon who half got it later.
Posted by David at 5:19 pm