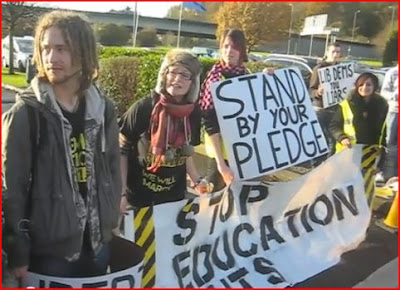 I remain as vehemently opposed to tuition fees as ever but I am sick to death of Labour hypocrisy over the subject. (Here's an example from their demo outside our conference in Plymouth). We all know that if there were a Labour government today they would be increasing tuition fees as recommended by the Browne Report which they commissioned. Here's their duplicitous record.

July 1997
Education Secretary David Blunkett announces the introduction of means-tested tuition fees (to begin in September 1998). The student grant of £1,710 is abolished to be replaced by income-contingent student loans.

January 22 2003
Less than two years after pledging not to introduce top-up fees, Labour (Charles Clarke this time) publishes a white paper setting out proposals allowing universities to set their own tuition fees up to a cap of £3,000 a year.

I am not for a moment saying that Labour and Conservative behaviour excuses broken pledges by Liberals, but all those demonstrating now should think twice before blaming everything on us. When I pointed this out to the girl with the megaphone in Plymouth (see video) and asked who she would vote for, she replied, "I think I'll just hang myself."
Posted by David at 11:20 am