Whatever you do, don't abstain ! 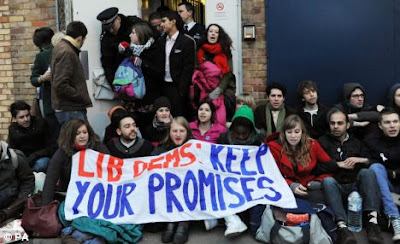 I should, of course, publish a long reply to Ed's well-informed remarks on tuition fees. For the moment, I content myself with saying that his view of higher education - and it's a common one today - is a commercial one in which education is regarded as a commodity and the student as a consumer. Many people in government share this view. It may explain why another feature of the settlement is a massive reduction in state support for arts degrees.

I don't share this view. Education, including higher education, remains for me not only a private good, but a public good because it is the silver bullet which makes a society happier and healthier and not merely wealthier. As the Liberal Democrat education policy Equity and Excellence says, "Liberal Democrats believe in freedom. A free society is one in which no person is enslaved by poverty, ignorance or conformity".

You can defend the university settlement as Nick Clegg does in today's Independent on Sunday and vote in favour of it.

You can stick to the oft and widely repeated pledges to the voters, of which this is but one sample: "Liberal Democrats believe tuition fees are wrong", an extract from "Why vote Liberal Democrat" edited by Danny Alexander and published on 1st March 2010 two weeks before he wrote in a confidential memo " On tuition fees we should seek agreement on part-time students and leave the rest. We will have clear yellow water with the other [parties] on raising the tuition fee cap, so let us not cause ourselves more headaches." and two months before he campaigned on a promise TO VOTE AGAINST ANY INCREASE IN FEES. This particular memo shows not only a willingness to deceive the voters but an appalling lack of political judgement concerning other parties' positions and the public reaction.

This isn't a question of a manifesto commitment which we can't fulfil because "we didn't win the election". This isn't about failing to do something because we can't. It's doing something we promised not to.

So I conclude: VOTE AGAINST. But above all, don't abstain. Abstention is a ridiculous option. It shows how the Westminster bubble focuses its occupants inwards and obscures the real world through a veneer of parliamentary procedure. Abstention would annoy the Tories but simultaneously do nothing to assuage the tide of hostile public opinion. It would confirm many people’s prejudices about Liberal Democrats.
Posted by David at 5:39 pm