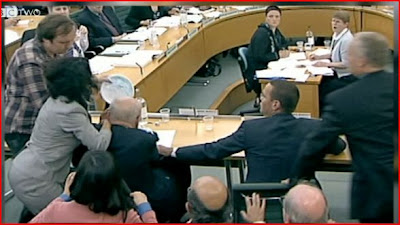 The picture shows Jonathan May-Bowles (allegedly) in a check shirt attacking Rupert Murdoch with a custard pie. Wendy Murdoch (dark hair and red dress back to camera) is about to get up and clout May-Bowles, who apparently tweets as JohnnyMarbles.

According to Lord Bonkers, Molesworth blamed the pie on Peason. Bonkers also avers that he twittersphere suggests that Rupert Murdoch's defence is that he has never heard of the News of the World. Someone also commented that Murdoch has also denied all knowledge of the custard pie.
Posted by David at 5:37 pm