What are you doing about it, Vince ? 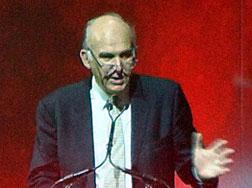 Last night BBC's File-on-4 explained some of the games bankers play. Finally I understood what a naked Credit Default Swap (CDS) is. You take out insurance against your investment in a government bond (or whatever) failing because the borrower defaults. However, unlike the insurance that you or I take out on our homes, cars, lives, you can sell the CDS to someone else, who does not hold the original investment. The CDS is now naked and it's owner has an interest in the original investment failing, as Greece is now finding out. The European Parliament is trying to outlaw some of these naked CDSs, but is running into opposition led by one member-state - the UK !

Over a year ago I asked Vince Cable what role he saw for the EU in financial regulation. He ducked the question, more or less suggesting that the UK could act without the EU. Come on, Vince ! I know you're Eurosceptic but I heard your attack on the bankers at the Social Liberal Forum. How about putting your money - or your supposed ministerial clout - where your mouth is ?
Posted by David at 9:32 am