"Their Lordships die in the dark" 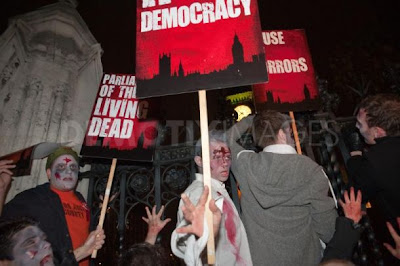 So wrote George Dangerfield in the Strange Death of Liberal England*, but their house lives on. In the opening words of the Parliament Act 1911, it is written: "...whereas it is intended to substitute for the House of Lords as it at present exists a Second Chamber constituted on a popular instead of hereditary basis, but such substitution cannot be immediately brought into operation..."

Mark Pack writes about the concessions behind the Act in Total Politics blog. What a pity one of them was not bringing in a Land Tax. A hundred years later let's abolish the house of the undead AND introduce Land Tax. Now that would be new politics, Nick.

(*Now the name of a an experimental/folk/indie group from Southsea.)
Posted by David at 2:59 pm