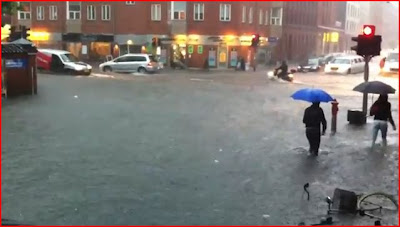 What a glorious weekend we had in Somerset ! The gravel beaches were full of white blobby bodies turning red. I walked up Glastonbury Tor in the sunshine where there was so little breeze I could light my pipe with a match.

Not so glorious in Copenhagen. This film shows dramatic flooding in the streets of the Danish capital. Note how the Danes drive, cycle and walk through the floods with characteristic Scandinavian phlegm. I bet even the trains worked whereas the British train operators came up with a new excuse recently - railway tracks too hot. That's three seasonal excuses for railway failure: Summer - hot tracks, Autumn - leaves on line, Winter - wrong kind of snow. They just need some new excuse for the Spring. Any ideas ?
Posted by David at 10:34 am