Liberals - NOT defined as centrists 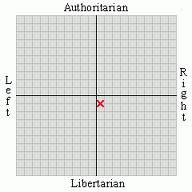 Someone recently described the Liberal Democrats as a centrist party. Here's what I thought of that in 2005 and it's still true.

During the [2005] general election various journalists with self-satisfied smirks, indicating that they thought they were doing something clever, would ask a Liberal Democrat, “Are you left of Labour ?” as if the question meant something. As well ask, “ Are you against sin ? Are you for motherhood and virginity ? (perhaps not in that order)”. Why don’t they do something useful instead, like delivering some focuses or, God forbid, writing some ? They would ask it as if the categories of twentieth or even nineteenth century debate were still meaningful, as if the terms “Left” and “Right” conveyed the same meaning to the speaker and all the listeners. The BBC website even had a page supposed to help the anxious enquirer in resolving the question.

How many of these scribblers, quibblers and mediacrats know that the terms “Left” and “Right” were coined before the arrival of socialism, before Karl Marx was a gleam in his mother’s eye (My favourite story about Karl was what his mother said when he was working on his magnum opus, “Why doesn’t he stop writing about it and make some ?” Just what my mother would have said.) As all Liberator readers know and could tell Jeremy Paxman, the terms derive from the 1791 Legislative Assembly during the French Revolution, where the monarchists sat on the right and the Jacobins on the left. Hence the general idea that the left favours change and the right opposes it. It is in that broad sense that Kremlinologists after 1989 described communists as right wing and free-market-reformers as left wing. And what of the Thatcher years in Britain? Who favoured change and who opposed it ?

In the twentieth century, socialism was seen as progressive and therefore left-wing and the right wing as defined by Wikipedia (the online encyclopaedia) referred “...with no particular precision to the segment of the political spectrum in opposition to left-wing politics”. The party regarded as the most right wing was of course the German National Socialists. OK, let’s not be pedantic. We know that language wanders about but there comes a point where it is actually off the map. The cause of this confusion lies deeper than historical meandering. The attempt to reduce all political dialogue to “Left” and “Right” presumes one axis of debate, an axis which is itself always shifting. To imagine that all social concerns can be expressed along one axis is as daft as the Brobdignagian struggle over the correct end at which to open an egg. Even to imagine that most issues fit on one axis, with the occasional exceptions subject to a free vote, is to stifle and limit discussion not to widen and encourage it.

Those who want to defend the use of “Left” and “Right” will characterise the first as being about state ownership, equality and the interests of the working class and the second about private enterprise, liberty and the interests of the middle class. These seemingly opposed ingredients have long been blended into a fusion of school dinners that would make Jamie Oliver throw up. In most industrialised societies we expect levels of taxation and public services unimagined by “Left” and “Right” of years gone by and mixtures of public and private ownership; our class systems are not bipolar and most people consider other aspects of their existence more important than their class; material equality is no longer expected and liberty is undervalued and taken for granted despite the depredations of David Blunkett and Charles Clarke. The British political parties do not fight on these grounds any more but offer different presentations of much the same mixtures. They try to attract the electorate not by solid principle but by the superficial and cosmetic. Like nouvelle cuisine, some of the policies look interesting but the meal is unsatisfying (and overpriced).

All right, you say, we’ve got it. “Left” and “Right” are old hat and should be removed from all lexicons, school books and road signs. But what, you continue in your insidious way, do you propose instead ? Enough negative campaigning, eh ? Well, just one more negative. I don’t propose that giddy (or Giddeny) goulash of nonsense Mr. Blair’s friend at the London School of Economics (and now the House of Lords) chose to call “the Third Way” as if there were no more than two to start with. I do, however, look to one of the LSE’s more interesting directors, Ralf Dahrendorf. In his book, “Class and class conflict in industrial society” (1959), he suggested a new model of class based on the distinction between those who exert authority over others (the command class) and those who are subject to authority but exercise none themselves (the obey class). Here is a model that a Liberal understands instinctively. In 1979, he proposed the idea of “life chances”, a combination of the range of choices available to an individual (options) and the social connections in that individual’s life (ligatures). In 1974 in the Reith lectures he suggested changing the subject of history, away from the debate about the role of the state in the economy. The real issues are about control not ownership, accountability to the public rather than the stock exchange or the treasury. Politics, based upon people’s needs and wants rather than their jobs or investments, requires more than one axis.

We can make a small advance by considering two axes. Make no mistake, this is still a model. The map is not the territory, but it helps you work out where you’re going. In 1954 H.L.Eysenck in “The Psychology of Politics” demonstrated a two-axis model with Radical----Conservative on the x axis and Authoritarian-----Democratic on the y axis. If you looked at the usual Left-Right x axis, the Liberals were in the middle. If you changed the subject of history and looked at the y axis, the Liberals were on the democratic end and everyone else was between the middle and the authoritarian end. A similar and more developed analysis is available in modern form on the website www.politicalcompass.org with a questionnaire which places you on a two-dimensional graph. The website www.publicwhip.org which monitors voting in the House of Commons has produced a graph by cluster analysis which looks very like the same pattern, with Liberal Democrat MPs’ votes grouped in the middle of the first axis but up one end of the second one. I offer these references for further research and do not attempt further summary. They can provide a thoughtful answer to the tedious “Are you to the left of Labour ?” but not one that even Lembit Opik could condense into a soundbite.

A variation on the journalists’ question is the one confronting the 62 Liberal Democrat MPs, “How should the party position itself ?”. I hope this question will also be considered by the party as a whole even though Charles Kennedy has now joined David Steel in his contempt for the Party Conference, which he characterises as “... a brief desultory debate in a largely empty hall” as opposed, I imagine, to a completely packed kitchen cabinet. Many, bruised and battered by the election campaign, will seek a psephological answer. My calculations show Liberal Democrats now in second place in 105 Labour seats and 83 Conservative seats, but in the 23 seats needing less than a 5% swing, the balance is different: 14 Conservative and 9 Labour. The 62 MPs already elected may pay more attention to the parties challenging them; 44 face a Conservative challenge, 17 a Labour one and one a challenge from Plaid Cymru. At first glance, the maths suggests that the competition is for Conservative votes, but it isn’t that simple. The Conservative vote is much more solid than the Labour one as we found out in the election and many Liberal Democrats depend more upon squeezing the Labour vote than they do upon picking up Conservative votes. In the end, the decision should not depend upon these numbers because it is impossible as well as unprincipled to seek a position, defined by its relationship to other parties’ positions, which are themselves changing.

It would be a foolish and dispiriting experience for the party to spend the next few years agonising over the left-right argument. It would also be self-defeating because that debate ignores our Liberal heritage and defines us instead in other people’s terms. Nor should we seek some new and magical middle ground. Remember, that’s one-axis thinking. It is not enough to say we believe in social progress and reform, a phrase that echoed round the leadership hustings a few years ago. Both the state and the market can serve the needs of the individual but neither is the solution to all problems. Both can concentrate power in the hands of the few and ignore the wishes of the many, both can deny diversity and reduce freedom. New Labour’s combination of private provision of public services and micro-managed Treasury targets combines the disadvantages of state and market and loses the benefits of each. We should build on our traditional emphasis on choice for all, on the value of diversity. To revert to the French Revolution, the Tories are still the Right, Labour are the centralising Jacobins and we are the Girondins with a firm faith in decentralised government. As the Conservatives cast around desperate for new ideas, don’t let them steal ours because, in the end, Liberalism is what’s left.
Posted by David at 11:04 pm

The political compass idea is very close to the model that Donald Wade suggested in his best selling pamphlet;Our Aim and Purpose. That, of course,hailed from a period under Grimond's leadership when we were trying to re-align the Left.....