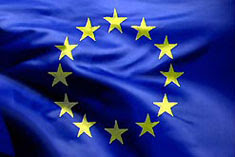 The European Parliament's Culture and Education Committee debated a motion on the European dimension in sport this week, UKIP salivated and the Daily Mail and the Daily Express foamed at the mouth.

Here's the idea that shocked our great patriotic newspapers:
"The European Parliament...
26. Proposes that the European flag should be flown at major sports events held on EU territory and suggests that it should be displayed on the clothing of athletes from Member States; "

Here's how the Daily Mail reported it:
Brussels bureaucrats will today make a desperate bid to shore up their plans for a European superstate by forcing British sports players to wear the EU flag on their strips.
The shock plans will demand that all of the country's national heroes in sports such as football, rugby and cricket, display the blue and yellow flag - or face hefty fines of thousands of pounds.

Here's the boring truth. This is a draft report at committee stage. It's not even draft legislation as the European Parliament has no power to initiate legislation. The suggestion was the 26th item in a report which even UKIP acknowledged was a good report. The European Parliament are not Brussels bureaucrats, they are elected politicians and the actual bureaucrats, the European Commission,merely wait to receive the report. Would the Mail call MPs Westminster bureaucrats ? Nothing in the report calls for fines.

As Julia Gillard told the Murdoch press, so I say to the Mail and the Express: Stop writing crap ! Time to listen again to the great Dan and Dan's Daily Mail song.
Posted by David at 8:42 am