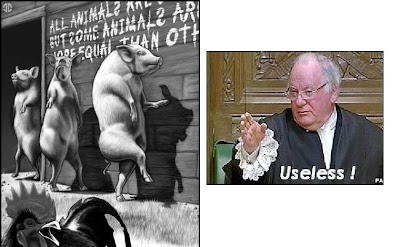 As the pigs of Animal Farm finally proclaim, "ALL ANIMALS ARE EQUAL BUT SOME ANIMALS ARE MORE EQUAL THAN OTHERS". If MPs do not wish to be equated with these same pigs for exploiting their allowances in ways that would be forbidden or condemned in any other job, resisting the publication of their expense claims and then defending their behaviour because it was "within the rules" that they themselves had agreed to and failed to change, they must do more than change the rules.

I suggest:
1) Sack the speaker who exploited the rules himself, spent £100,000 of public money on m'learned friends trying to stop publication of expenses and failed to give his staff the backbone to stand up to absurd claims;
2) Force the resignation from the Cabinet and Shadow Cabinet of the worst offenders;
3) Introduce retrospective Capital Gains Tax on all the capital gains made by MPs over the last ten years through abuse of the second homes allowances.

Only such drastic measures can begin to restore confidence in democracy. If we don't restore it, we will give strength to the campaigns of the demagogues of UKIP and the BNP.
Posted by David at 9:07 am