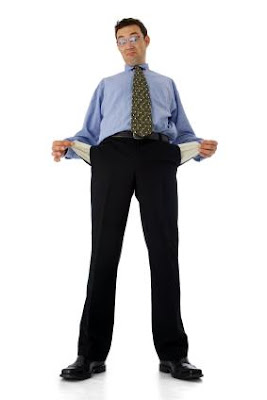 As, I think, Terry-Thomas (or possibly Snoopy) might have said, "It matters not who wins or loses, but how you place the blame".
So who do we blame for the financial mess - the bankers or the borrowers ?

On the other hand, Keynesian Liberal quotes an unpublished letter to the Guardian, which equally firmly blames the bankers.

It remains a political truth that the government of the day will always get the blame, even if the causes were before they came to power.
Posted by David at 9:44 am

I blame both the major parties.

The truth is `the financial mess` as you call it has a number of causes, some long-standing.

Firstly, the pensions crisis has been in the offing for years, but successive governments chose to do nothing about it, each hoping the other would be in power when the crisis became unmanagable.

Then there`s the failure to place Britain`s manufacturing base on a firm footing, coupled with an over-reliance on the financial services sector. Again both major parties are guilty.

And obviously, only a cretin would think we could fight two wars simultaneously and bail out the bankers without a pretty hefty price tag.

I don`t doubt that Labour deserved to lose the last election, but I doubt very much that they are the only ones to blame.

Keep up the good work with your very interesting blog.