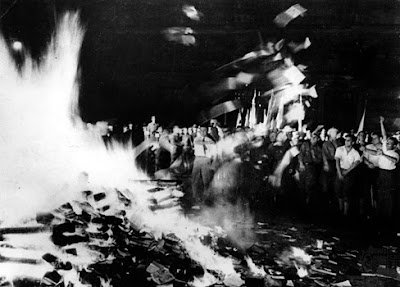 Pastor Terry Jones of Gainesville, Florida, plans to burn the Quran on Saturday (9/11 in the backward American usage). Many have quoted Heinrich Heine, who in 1821 was referring to the burning of the Qur'an during the Spanish Inquisition: "Where they burn books, so too will they in the end burn human beings." The Nazis proved him right, burning his books in Berlin's Opernplatz a century later before they moved on to burn people.

I searched for a biblical injunction against burning books but found this:
"Many of them also which used curious arts brought their books together and burned them before all men ... So mightily grew the word of God and prevailed." Acts 19:19-20. This was quoted by this bunch of Baptist nutters, who proclaim proudly:
"The burning of books is nothing new to True Christians®. We invented the practice over two-thousand years ago as a way to promote our faith in the Lord Jesus. In the early days of Christianity, when new believers in Christ were converted, they were naturally moved by the Holy Spirit to grab as many books as they could and pitch them into a fire. Unlike the sissy "Jesus is Love" fake-Christians (whom both the Lord Jesus and we loathe) we have running around today, the early followers of Christ were never ashamed to burn books. In fact, if you ever find yourself being grateful for the destruction of most of the works of pagan nincompoops like Socrates, Plato, and Aristotle, you have a Christian to thank! ".

At first I though this was some kind of spoof, a parody, but no, it's real. They go on to announce: "As most Christians already know, the Harry Potter book series is the most evil and dangerous set of books to be released this century.".

They are perhaps marginally less nutty than Marc Grizzard of the Amazing Grace Baptist Church in Canton, North Carolina who maintains that the first King James translation of the Bible is the only true declaration of God’s word, and that all others are “satanic”. On Halloween, he's going to burn the following “perversions of scripture" : The New Revised Version Bible, the American Standard Version Bible, and even the New King James Version.

Let's not forget Sarah Palin's old church, the Assembly of God, which has burnt Harry Potter books, music by Bruce Springsteen and Pearl Jam and that ungodly tale, Pinocchio.

Sometimes I thank God I'm an atheist.
Posted by David at 11:52 am