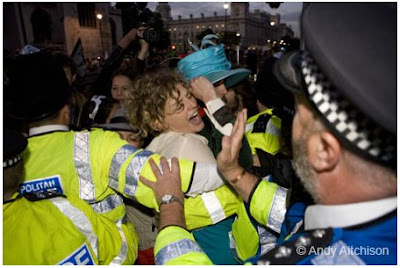 I came across the campaign Climate Rush when a member of my family (nearly) took part in singing re-written carols in Central Lobby in the Palace of Westminster at Christmas to highlight climate change. Searching I found the campaign had done many good things which I do admire. Here comes the but. They are, however, a little too please with themselves. The film "Deeds not words" tells the story of a few weeks of preparation for a rush on parliament 100 years after the suffragettes did it. Climate Rush mobilised a 1,000 people to demonstrate. Their motivation and organisation were excellent but the result was NOT historic as they seem to think. Many of us have found that it takes years and years of activity to change almost anything in society. It's called politics and, yes, it can be boring, it can be disheartening but as Bernard Crick wrote "Politics and love are the only forms of constraint possible between free people".

I too demonstrate. Sometimes you just have to. You have to bear witness. You have to show your disgust, your anger, your demand for change. Yet I cannot honestly say that any demonstration I have taken part in has changed the world. The minor changes I have contributed to in environmental policy I did by the old-fashioned ways of politics and lobbying. So, yes, let's demonstrate when we must but let's do the long-term grind as well.
Posted by David at 10:14 am