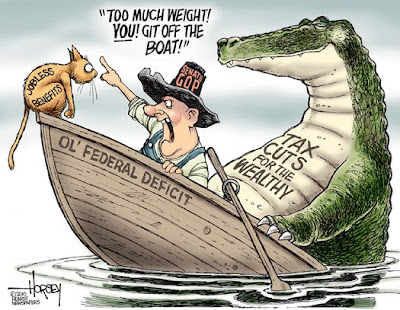 Much public disgust at Bob Diamond's bonus. In a free society, government can't start dictating incomes for particularly industries. Apostles of the market usually argue that competition brings down costs, but not when it comes to bankers' incomes. The solutions shouldn't be too taxing for the First Lord of the Treasury nor all the politicians and civil servants who report to him, with their 1st class degrees in PPE or just economics.

Firstly, bring real competition into banking by breaking the banks up into smaller units. If that damages their ability to compete with foreign giants in the money markets, first bring back the old split between merchant banks and clearing banks, then split up the clearing banks.

Secondly, as society develops some people's labour becomes increasingly more productive as they control more and more capital whereas most people's productivity lags far behind. Thus we get an ever-growing gap between rich and poor, which distorts the ability of markets to allocate resources because the rich minority's demand is so much more effective than the poor majority's. Again the solution is well-known - tax higher incomes (whether bankers' incomes or anyone else's) at higher rates. British income tax levels are pretty low. Even modest increases would raise revenue which would help to reduce the deficit and would be fairer than cuts which hit the poorer. Why ever not ? The constraint is political. Since the 1992 General Election it has become accepted wisdom than raising taxes is unpopular and will be punished by the electorate. This is a clear constraint on the Labour Party but what is to stop the Coalition Government raising Income Tax ? Surely our leaders don't fear that the voters will desert to the Labour Party because of higher taxes ?
Posted by David at 6:18 pm

I agree. One additional point is that the dominance of one model of ownership-share ownership creates some of the problems for the banks. If they are soley concerned with increasing share value then they will take excessive risks-after all they are too big to fail. The new regional banks you suggest should be mutually owned so that a priority will be serving their members. It will control pay and distribute jobs across the country

I didn't actually mean regional banks, just more and smaller national ones. However, regional banks would be a good idea too. The German Sparkasse might provide a model. I have many more comments on Facebook and by private e-mail and will try to summarise them.