I have in my hand a piece of paper... 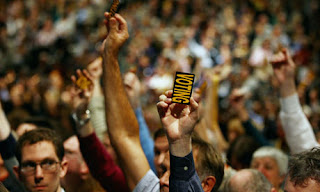 Fascinating debate tonight in Cambridge on whether the preamble to the constitution of the Liberal Democrats should be amended.   We decided not to, not only because Cllr Colin Rosenstiel has  amended it enough already, but because it embodies in reasonable prose values which have stood the test of time.   There are indeed one or two minor infelicities of expression and a bit of repetition but nothing any of us would actually want to oppose.

Julian Huppert compared our golden opening words with the other main parties.

The Liberal Democrats (constitution here)The Liberal Democrats exist to build and safeguard a fair, free and open society, in which we seek to balance the fundamental values of liberty, equality and community, and in which no one shall be enslaved by poverty, ignorance or conformity. We champion the freedom, dignity and well-being of individuals, we acknowledge and respect their right to freedom of conscience and their right to develop their talents to the full. We aim to disperse power, to foster diversity and to nurture creativity. We believe that the role of the state is to enable all citizens to attain these ideals, to contribute fully to their communities and to take part in the decisions which affect their lives.


Clause 1 - Name and Objects
1 This organisation shall be known as ‘The Labour Party’ (hereinafter referred to as ‘the party’). Its purpose is to organise and maintain in Parliament and in the country a political Labour Party.

So the Labour Party and the Conservative Party  exist to maintain and promote themselves.  I always thought so.  (Actually the Labour Party says a little more in Clause 4 - no, not that clause 4)

Looking a little deeper, I wondered about how each party makes policy.

The Liberal Democrats (constitution here)
5.8 Subject to the foregoing procedure, all Federal policy papers and motions approved by
the Federal Conference shall thereby become the policy of the Federal Party.
...
6.7 Subject to the provisions of this Constitution, the Conference shall be the sovereign
representative body of the Party, and shall have power to determine the policy of the
Party in accordance with and subject to the provisions of Article 5.

The Labour Party (constitution here)
Clause 5 - Party Programme
1 Party conference shall decide from time to time what specific proposals of legislative, financial or administrative reform shall be included in the party programme. This shall be based on the rolling programme presented to conference by the National Policy Forum as approved by conference. No proposal shall be included in the party programme unless it has been adopted by conference by a majority of not less than two-thirds of the votes recorded on a card vote.

BUT N.B. " The 2008 Labour Party Conference was the first at which affiliated trade unions and Constituency Labour Parties did not have the right to submit motions on contemporary issues that would previously have been debated.[28] Labour Party conferences now include more "keynote" addresses, guest speakers and question-and-answer sessions, while specific discussion of policy now takes place in the National Policy Forum."  (Source - wikipedia)  How many constituency members in the National Policy Forum ? 55.

PART VIII
THE CONSERVATIVE POLICY FORUM
64 There shall be established and maintained a national policy development forum to be known as
the Conservative Policy Forum, the principal functions of which shall be:
64.1 to encourage and co-ordinate the formulation and development of policy ideas

...
BUT  nowhere in the Tory Constitution can I find who actually decides on policy. It's a mystery.

Open question for you - Does the Conservative party have policy? I don't think it necessarily needs to, and it would fit with their more social membership and increased political involvement (e.g. candidate selection) from non-members.

Sorry, Peter, for the delay in posting your comment. Been busy and forgot to check.