An excess of deference. Never give up ! 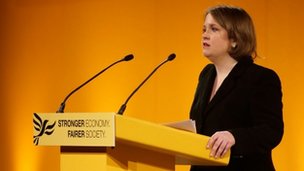 At the Liberal Democrat Spring Conference, Jo Shaw, a human rights campaigner and former parliamentary candidate, resigned from the party in the most public fashion when speaking from the rostrum against the Justice and Security Bill.  Conference overwhelmingly supported her view but she was wrong to resign.   A party is the sum of all its members not the errors of its leaders.  I hope she will be back.

To my surprise, Jo did not support my campaign against accreditation, which I promise is not over. Of course the question of secret justice in the courts is a far more important matter but how we run our own party and how much members care about it angers me more.   Although I share Jo's view of secret courts, I can understand the argument on the other side and do not consider that those for whom it is persuasive are therefore not Liberals.   Strangely, I am more upset by the manipulation of our own processes by those we elect to run our party's committees.  If I wanted unfair procedures or manipulation, I would have joined the Labour Party.

Last year it was the Federal Finance and Administration Committee (FFAC) which overruled the clear view of conference by imposing accreditation again. This conference saw another blatant example. The Federal Conference Committee took it upon itself to overrule a ballot of members on the choice of emergency motions.  They rejected the representatives' choice to debate the economy and substituted their lower preference to discuss Leveson.  Whatever the respective merits of the motions, they behaved undemocratically and beyond their powers.   Standing Order 4.5 empowers the committee: "Following the counting of any ballots the Committee shall decide how many motions shall be debated in the time available.".  It does NOT empower them to choose WHICH motions shall be debated nor to overrule the ballot.  When I shouted "outrageous" as the decision was announced, a lady objected that the committee had informed us before the ballot that they would do this.   Giving notice that you intend to behave undemocratically and to exceed your powers is no excuse !  Andrew Wiseman, chairman of the committee, told me that they had done it before.  I regard that as asking for previous offences to be taken into account.

When Martin Tod challenged the decision by seeking to suspend Standing Orders, we failed to get the required 2/3 majority.   This saddens me immensely.   It represents a change in the culture of our politics.  I have no doubt that the old Liberal Assembly would have stood up for itself and respect for its rules and suspended the standing orders to put the committee in its place as its servant.   We are suffering from an excess of deference to authority.  Jo, come back and help us challenge it.
Posted by David at 8:34 am

One other difference, David. There is now a significant payroll vote, mostly but not all Parliamentarians, and a significantly larger amount of patronage to be handed out in the form of jobs and peerages etc. There is no doubt that this was being used too.

Back at home and not able to afford to come to the conference, both physically and more importantly monetarily, was furious at the decision of our parliamentary party after the very clear signal at the conference last September. Resign? No I would not have done as changes have to come from within and not from the outside as I frequently say on the doorstep when people say they don't intend voting because it doesn't chamge things. 'Cocking a snook' at conference votes, as you mention David, would not have been common in our old assemblies..........and would Jo were here to remind us all of our true values as Liberal radicals.