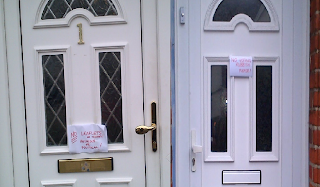 Back from Eastleigh with a bad ankle (too many doors) and a bad stomach (too much fast food), but happy.   On polling day, we found many residents had attached hand-written notes to their front doors, loosely translated as "Go away !".  O'Farrell posted one on twitter than was more explicit in conveying what Clement Freud used to render as "Go forth and multiply".  In case they can't be read the two above say "NO leaflets or callers: religious or political" and "No voting rubbish please".   Given the huge effort by Liberal Democrats and other parties, it would not be fair to say that these people don't value their vote.  They had simply had enough paper and enough canvassers.  Those who have the vote will never value it as much as those who don't.  In the 1980s I was knocking up with a vigorous old lady, a former suffragette, when a first-time 18-year-old girl voter said she probably wouldn't vote as she had to wash her hair.   My companion exploded at her. "I marched to get you the vote" and much more.  The girl agreed to go and vote.
Posted by David at 11:31 am