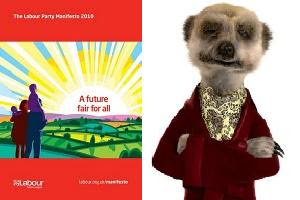 The opportunistic self-serving hypocrites who lead the Parliamentary Labour Party are going to vote against a referendum on AV despite their own commitment to the idea a few weeks ago. The arch-hypocrite (and sadly typical ex-NUS President) Jack Straw explains that the bill also provides for redrawing boundaries and reducing the number of constituencies. Of course the real motive is to join with Tory anti-referendum backwoodsmen rebels and defeat the government. So, the obvious solution - split the bill in two. Will Labour have the unashamed gall to vote against a bill only for a referendum on AV ? I doubt it, but if they did we would see their essential and deep-seated conservatism revealed. Simples !
Posted by David at 10:17 am