The police get away with it - again ! 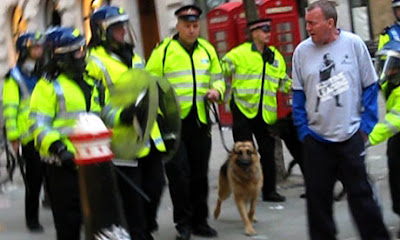 The decision of the CPS not to prosecute the police officer, Pc Simon Harwood, who struck and knocked over Ian Tomlinson is indefensible, unforgivable, outrageous. The Director of Public Prosecutions, Keir Starmer should resign. The CPS Statement says that "...there is no realistic prospect of a conviction for unlawful act manslaughter." because of conflicts in the medical evidence. Perhaps they haven't heard of the jury system, in which twelve members of the public decide who to believe. It's what we commonly use when the accused is NOT a policeman.

The CPS also failed to prosecute for any lesser charge than manslaughter. After a year they have decided what we can all see in the video evidence: "Having analysed the available evidence very carefully, the CPS concluded that there is sufficient evidence to provide a realistic prospect of proving that the actions of PC 'A' in striking Mr Tomlinson with his baton and then pushing him over constituted an assault." so they're not completely stupid. They're just inexcusably slow. Why take a year to review the evidence ? Why not bring charges of common assault within the six-month time limit ?

Perhaps the policeman concerned will face charges under the Health and Safety legislation like the policemen who killed Jean Charles de Menezes. Perhaps he'll face a little reprimand under the internal disciplinary procedures. Or perhaps he will conclude that he can behave just as badly as he likes, because his colleagues will lie to the press to protect him, because his bosses will employ incompetent doctors who will screw up the evidence and because the bloody geniuses at the CPS can't put a case together in under a year !

Now it turns out Pc Simon Harwood had already reached that conclusion, having been previously investigated twice over his alleged aggressive behaviour.
Posted by David at 8:46 pm

Camerons filling the jails to busting with petty criminals while not one police officer resides in jail for murder and there are many cases . Hey ho this is democracy why should we complain were all free , as long as the police don't get involved! !!!