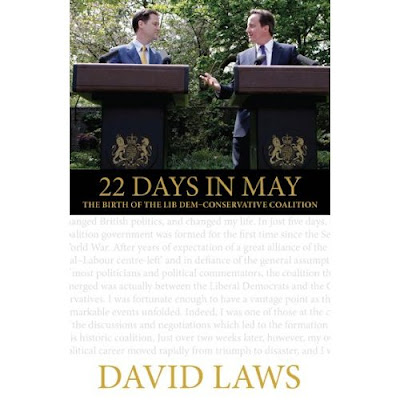 From David Laws' insider account of coalition negotiations serialised in the Daily Mail (!) three points emerge.
1. Labour was divided with senior figures against a deal (we knew that anyway).
2. David Laws was much more comfortable negotiating with the Conservatives than he was dealing with his own party (suspicion confirmed by his own words).
3. We don't have "new politics" in Britain. Other European countries have established procedures for serious coalition negotiations. We have a mad scramble to reach agreement in a few days and, if possible, before the markets open. Even the Americans have a sensible transition period between administrations.
Posted by David at 11:47 am

Books by/about career politicians tend to be unpopular and I can`t see this one being much different.

More important is Disgruntled Radical`s comment that we do not have `new politics` in Britain (yet ?), which I totally agree with.

I tend to be a `glass is half full` kind of person and have to say I think there is a lot of potential for change, particularly when one looks at the various `grass roots` type bodies that have sprung up all over the country and often seem to have cross-party support at local level, sometimes from the most unlikely quarters.

Particular examples that spring to mind are Friends of Bramwell Care Home, Save Newark Hospital, Save Bright Start Day Nursery, Save Durban House.

I`m not sure if I`d put my trust in any of the political parties as things stand - I voted Lib Dem at the last election and had thought about joining, but I don`t think I`ll be doing that. I do see possibilities in 38 Degrees, Unlock Democracy etc.