The kindest cut of all - abolish the UKTI DSO 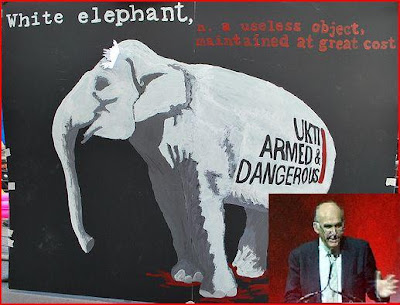 In September the Liberal Democrat Conference voted "...to shut UK Trade and Investment's Defence & Security Organisation (UKTI DSO), without transferring its functions elsewhere, and to end export credit support for military goods." Our noble friends in the Lords are currently debating the Public Bodies Bill which empowers ministers to abolish quangos. What better body for quangocide than the DSO ? Strangely it isn't in the bill.

The Campaign Against the Arms Trade (CAAT) produced "Private Gain, Public Pain" a report on the DSO as symbolised by the elephant in the picture, in which you can also see Vince Cable speaking at a DSO symposium this month.
Posted by David at 12:31 pm