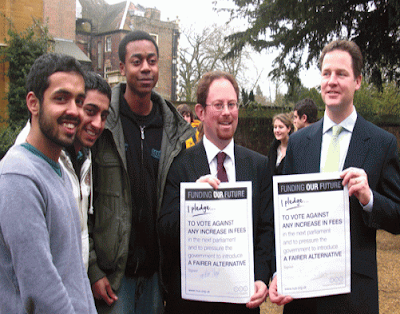 First, the good. Aung San Suu Kyi released. This must outweigh all the other news today. Tim Farron elected Lib Dem President: OK, not on the same scale, but good news nevertheless as we may now hear some Liberal Democrat policies being promoted for a change.

Now the bad. Chiefly and so depressingly the Guardian reports "Revealed: Lib Dems planned before election to abandon tuition fees pledge.". If this true, then we have all been lied to and I am not sure that I can remain in a party whose leadership shows such contempt for its members.
Posted by David at 1:54 pm

Yes the news from Burma may be good if it is a sign that international pressure is working but the military there are no idiots so I'll hold off a bit before celebrating as they are quite capable of using cat and mouse tactics.

I'm a Labour supporter but agree that given Tim Farron's principled stand on tuition fees that his election is to be congratulated and the support for him is a sure sign there are still some decent people in the LibDems.

The Guardian report is intriguing - Obviously it makes sense for a party before a GE to see what the effects of a possible coalition might have on policy/manifesto pledges and I would hope that there is a democratic oversight of this process in the LibDems and it isn't just left to a secret cabal.

But what really is important is whether those signing the personal pledges knew of the change in policy. If they didn't then it was a cynical vote winning exercise by Clegg and Alexander with no respect for the pledgers or pledges honestly given.

But if the MPs and prospective parliamentary candidates did know then quite simply the party will be destroyed as no one could ever trust any of them again.

Weasel words might be used to attempt to escape the full consequences of this affair but the public won't be deceived and if I had signed the pledge without knowing of the policy change then I would be demanding a public apology from Clegg and Alexander.