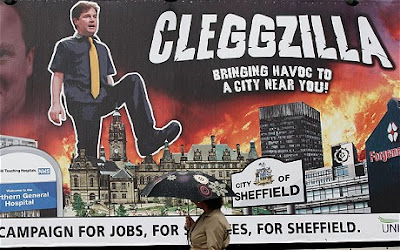 Today's Telegraph reports on the internal inquiry into the May local elections by the Liberal Democrat's Campaigns and Communications Committee. The committee says the party faced a perfect storm and identifies these factors:
* public anger over university tuition fees and NHS reforms;
* failure by Lib Dem activists to praise the Coalition Government during discussions with voters on doorsteps;
* reluctance by supporters of the two main parties to vote tactically for the Lib Dems in seats where their own party had no chance;
* high turnout among Tory and Labour voters because of the referendum;

To paraphrase the Earl of Strafford, "Put not your trust in leaders". They don't always know best and nor do the inexperienced wunderkinder who surround them in their offices.
Posted by David at 9:16 am

Has the report realised that the first two are linked?