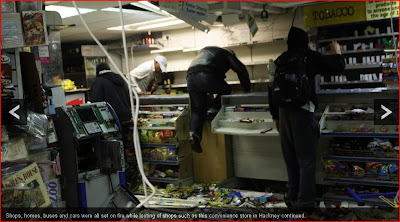 I have been looking at Facebook, Twitter and LibDemBlogs and listening to Radio 4. Radio 5 and BBC News 24 and trying to avoid my own anger and fear deteriorating into calls for the army etc. Comments fall into two categories: (1) condemnation of the rioters and looters and (2) searches for deeper explanations, usually involving government policy. For now, I settle on two points of social psychology.

Firstly, the relative poverty hypothesis. The rioters and looters are neither starving nor homeless. They may be hopeless. Compared with teenagers of earlier generations they are well off. Above all, all around them they see people enjoying wealth and consumer goods, which they cannot obtain legally. Some are really poor. Many more see themselves as poor.

Secondly, the loss of respect for the law. It's an old chestnut for students whether law and order is maintained by consent or force. Certainly when there is no consent, force will follow. The young criminals of the last three nights number far more than the usual habitual thieves of any neighbourhood. How have thousands of young people come to lose all concern for law ? Last night was not just an attack on rich chain stores. Some burned cars and buses, some hit anyone who tried to stop them, some broke into houses. Of course, it's still a small minority of the population, but it's a group growing up seeing the rich and powerful casually breaking the law with great impunity - cheating MPs re-elected, amoral bankers wrecking people's lives and still getting their obscene bonuses, police on the take, rarely held to account when they kill people, journalists with no moral qualms about their methods. Useless to protest that these too are minorities, that most politicians, police and journalists don't do this (You'll note I do not exonerate bankers). Someone I know well, on a small income, has recently been ripped off by a landlord charging extra when nothing extra was given and an employer in the restaurant where he works stealing his tips. Both landlord and employer are very well off and do not seem to be breaking the law. His reaction has not been to riot, loot or burn but he begins to understand why people do.

We cannot and should not excuse any of the rioters and looters but nor should we be surprised at their greed, envy and sheer anger untrammelled by any moral perspective in a world that shows them the prizes but keeps them out of reach.
Posted by David at 8:59 am

Email ThisBlogThis!Share to TwitterShare to FacebookShare to Pinterest
Labels: riots