Nationalism (2):EU funds: a little more sophisticated than cries of "our own money" 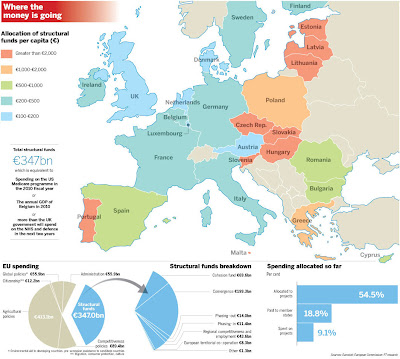 My friend Simon, whom I think would not reject the epithet "right-wing Liberal" has asked how I, as a Liberal, can "... argue that the decision as how to spend our own money in the UK should be taken in Brussels rather than locally". His question is approved by another friend, Peter, who I think would still welcome the description attached to him as a student - "left wing". I should perhaps add that both have spent some years working in the City of London.

Simon's characterisation of EU spending is typically crude. The spending under the structural funds actually works like this.
1)Member-states agree to share resources in principle in pursuit of common policies. They do this in treaties which each member-state signs voluntarily.
2) The European Commission drafts specific legislation giving effect to the common policies and setting up the rules for spending programmes. The legislation is discussed, amended and approved by the European Parliament and the Council of Ministers.
3) Each year the European Commission proposes the draft budget of the EU which is then discussed, amended and approved by the European Parliament and the Council of Ministers.
4)Member-states and local authorities propose spending programmes which meet the criteria set out in the legislation. The European Commission checks that the programmes conform to the legislation and agrees any changes with the member-state concerned.
5) Individuals, local authorities, businesses and NGOs propose individual projects which fit into the programmes. National or regional committees running the spending programme assess the proposals and decide whether to make grants. No European institution is involved. In other words the actual spending decisions are already devolved.

Like Mrs Thatcher Simon uses the term "our own money". When discussing the British national budget he would not talk of taxes paid by the people of Wimbledon or London as their "own money". This is because he is a nationalist and opposes the idea of any collective policies or budgets at a level above the nation-state. I imagine he does not object to the existence of multi-national companies, but only to supranational government. His nationalism only applies to the public sector not to the instruments of global capitalism.

Neither Simon nor Peter explains how you can have regional policy in a single market without supranational rules agreed democratically, enforced uniformly and operated locally, which is what we have now.

Once again I note how nationalism unites left and right. This was first noted by Altiero Spinelli and his colleagues exiled by Mussolini to the island of Ventotene. In the Ventotene Manifesto for a united Europe they wrote in 1941:
"The dividing line between progressive and reactionary parties no longer follows the formal line of greater or lesser democracy, or of more or less socialism to be instituted; rather the division falls along the line, very new and substantial, that separates the party members into two groups. The first is made up of those who conceive the essential purpose and goal of struggle as the ancient one, that is, the conquest of national political power – and who, although involuntarily, play into the hands of reactionary forces, letting the incandescent lava of popular passions set in the old moulds, and thus allowing old absurdities to arise once again. The second are those who see the creation of a solid international State as the main purpose; they will direct popular forces toward this goal, and, having won national power, will use it first and foremost as an instrument for achieving international unity."
Posted by David at 11:38 pm