Tuition fees - is there a coalition crisis ? 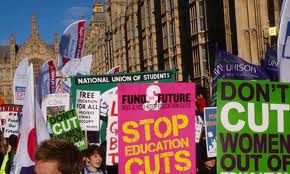 William Cullerne Bown, journalist, has revealed a briefing by Universities UK to Vice-Chancellors which suggests a sizeable rebellion of Lib Dem MPs and even ministers over tuition fees. Of course, any chance of a rebellion stopping a rise in fees depends upon the hypocrisy of the Labour Party, who introduced fees and would put them up if in power. Given that there is no lack of hypocrisy in Labour, a rebellion could succeed.
Posted by David at 2:47 pm

I suspect there will be a rebellion on this issue among a sizeable number of Lib Dem supporters, whether MPs, ordinary members, councillors or whoever.

Which way Labour will jump, I`m not so sure.

I actually think the issue of dissent within the Coalition is underplayed by the media. It`s striking how many community-based campaigns against specific cuts have cross-party support at local level - Friends of Bramwell in Notts springs to mind as a good example. It may be that some Coalition MPs and councillors support the cuts nationally but oppose specific cuts in their constituency, but still I think it`s significant.

I actually think the way out of the current crisis would be a balanced package of cuts, taxes and measures to stimulate industry since I agree with Andy Bridgen or possibly Budgen the Tory MP for Whitwick and surrounding area (North West Leics) that you can`t simply cut your way out of this type of situation, you also have to have growth.