Liberals in literature and films (1) 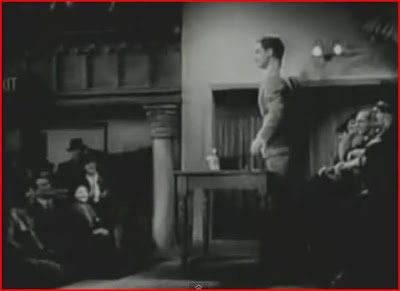 Those of us who have spoken on behalf of the Liberals from time to time may have some sympathy with Richard Hannay on the run in John Buchan's 39 Steps, when he finds himself unexpectedly addressing a Liberal meeting in the Highlands. The book makes it clear that it's a Liberal meeting but Hitchcock's film (1m 25s in) does not whereas the BBC's recent version does. Whilst one can see that the Czech stage version does indeed feature the candidate Mr Macorquodale, whether or not it makes clear that he's a Liberal I cannot tell as I don't speak Czech.
Posted by David at 5:54 pm

Of course, John Buchan did found the Federation of Conservative Students

Buchan makes it clear that Hannay doesn't agree with Mr Macorquodale's pacific Liberalism. Are you sure about Buchan and FCS ? I cannot find any reference. Buchan died in 1940 and the forerunner of FCS, delightfully known as the Federation of Conservative and Unionist University Associations (FUCUA)was founded in the late 1940s.

I could be wrong but I have a feeling that Hannay was being chased across Galloway not the Highlands. The road mender he met was certainly described as lowland Scots

Despite being a Tory MP from 1927 to 1935, Buchan has sympathetic portraits of Liberals in quite a few of his books and short stories. In "Castle Gay" for example, published in 1930, there is a thinly disguised Lloyd George renamed as Foss Jones.

In "The Gap in the Curtain" from 1932, the 5 major characters are all able to look a year ahead to the then copy of "The Times". Whilst two of them see their own obituaries, another, a leading Labour politician, sees that the leader of the small Liberal Party has become PM. He spends the next year working out how this could happen and getting it spectacularly wrong, leading in the process to the ruin of his own political career. The Liberal leader combines some of the characteristics of Gladstone, Grey and Campbell-Bannerman - not always the most appealing ones!