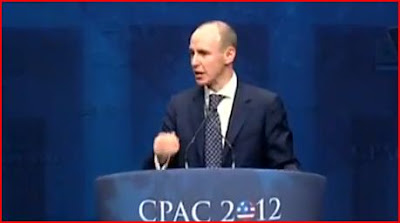 Lev Eakins has drawn my attention to a speech by the eurosceptic Conservative MEP Daniel Hannan, speaking to the gathering of American Conservatives known as CPAC.

Hannan's thesis is that the American Constitution is wonderful and he warns Americans not to follow what he regards as the European example of centralisation and too much government. The speech is a tour-de-force which flatters his audience and plays to their deepest prejudices. It is also disingenuous and dishonest. This man is not stupid. He's wrong.

Everyday of his political life he has resisted a federal Europe but here he is praising the federal system of the United States, which is one of the main sources of inspiration for European federalists. This sleight of hand is accomplished by never describing the American constitution as federal, only as republican. The magic is concealed by rhetorical misdirection. In one sentence he applauds the institutions created by the Philadelphia Convention and in the next he warns against the European example of "more government". When the American founding fathers set up a Presidency and a Congress and a Supreme Court, it was an example to mankind, "which would work everywhere". When the European Union's founding fathers set up the European Commission, the European Parliament, the Council of Ministers and the European Court of Justice, it's just "more government".

Hannan compared the ratification of the US Constitution favourably to the rejection of the EU Constitutional Treaty in referendums in three countries. No surprise of course that he failed to mention that the American founding fathers wisely specified that the new constitution would come into effect when 9 out of 13 states had ratified. The EU was saddled with the need for unanimity. (I have written elsewhere about this and will copy the full text in a separate post).

Hannan proceeded to quote Jefferson's criticisms of George III as apposite to his view of the EU, talking of far away government. Never mind that the American colonies were held by force whereas EU Member-States have all chosen freely to belong. The EU is NOT an empire, it is a union of separate states like....erm...oh yes, the USA !

Hannan also contrasted the famous text of the Declaration of Independence, "These truths we hold to be self-evident..."etc with the Charter of Fundamental Rights of the European Union, which he did not quote, being content to refer contemptuously to the right to strike. I'll grant that eighteenth century prose was better, not being filtered through fifteen or more foreign offices, but he could have cited the preamble thus:
"The peoples of Europe, in creating an ever closer union among them, are resolved to share a peaceful future based on common values. Conscious of its spiritual and moral heritage, the Union is founded on the indivisible, universal values of human dignity, freedom, equality and solidarity; it is based on the principles of democracy and the rule of law. It places the individual at the heart of its activities, by establishing the citizenship of the Union and by creating an area of freedom, security and justice."

He repeatedly warned against moving power to Washington, saying this was the European example. "We are at the end of the road you are set upon", he told his American audience. Hannan is not stupid. Presumably he knows that the US Federal Government already accounts for something like 60% of all US government spending and over 20% of GDP whereas the EU's expenditure is a tiny fraction of public spending across the 27 member-states and between 1 and 2% GDP.(More figures here). The EU has limited power in defined sectors whereas Washington has enormous power. His warning is nonsensical.

Hannan said the US was suffering from "Europeanisation" mentioning health-care and carbon taxes particularly. This went down well with his conservative audience who must be oblivious to the fact that US spending on health-care has outstripped Europe's as a proportion of national income yet fails unlike most European systems to provide health-care for all citizens. I suppose to an audience of climate-change-deniers carbon taxes sound unnecessary.

Hannan is a lively and engaging speaker. So was Hitler. In his own pernicious way Hannan is dangerous too, he distorts truth with a mix of humour and flattery for his audience. We should not admire his rhetorical skill when it conceals the lies he peddles.
Posted by David at 8:38 pm

Good points. They are at the end of the road we are set upon,in fact.

"Hannan is a lively and engaging speaker. So was Hitler."

So here we are at the bottom of the barrel. When all else fails, draw a parallel between something you don't want others to like and Adolf Hitler.

Excellent post. I maybe would have left out the Hitler comment though. You're not supposed to trigger Godwin's Law before the comments have even started.

Really?...do you think, with any honesty that the European Union, of all things is Liberal?? Hannan is standing to hold them accountable, standing FOR liberty and freedom as the picture at the top so rightly points out. As a liberal, should you not be natural friends with Dan?

If you must make comparisons, please make less odious ones. Hitler's orations were mainly emotional rants; Hannan's style is quiet, measured and articulate. A much more valid comparison would be with Churchill.
You, in common with most Europhiles, freely make assertions on behalf of the peoples of Europe, when you know perfectly well that few opportunities are given to those people to make their wishes known in referenda, since the results would seldom support the steps being taken on their behalf. The EU is a most undemocratic institution. Thankfully, like communism and other such experiments, its time is running out as its underlying unfairness is being exposed.

My point was not to compare Hannan to Hitler. He is obviously different and his rhetorical style is different. I was pointing out that there is no merit in rhetoric as such. The content matters. I am sorry that I chose Hitler because I want people to deal with the arguments.

Ewan, the European Union as such is neither Liberal nor Conservative nor Socialist just as the American Union is neither Democrat or Republican. I maintain that a liberal world is impossible without supranational forms of government. For example, if you believe in Free Trade, you cannot achieve it without supranational agreements about many matters affecting trade. At world level the WTO tries to achieve this but is both unaccountable and unsuccessful. The European Union has achieved free trade internally and its laws are decided by a democratic parliament representing the people and a council of ministers representing the states. Tell me, where is the loss of freedom ? Daniel Hannan is no liberal.

Roger, I was wrong to mention Hitler (see my other comment) because it has distracted people from the actual arguments, but you are wrong to mention Churchill. Hannan's style and views are nothing like Churchill's and Churchill was one of the first people to propose a United States of Europe. People in Europe obviously do vote in referendums. You may be interested to know that the US Constitution, which Hannan praises so much, actually forbids the use of referendums for constitutional amendments (See my post on federating Europe).

Explain, if you can, why you think the EU is undemocratic. I usually find the British europhobes regard it as such because foreigners get to vote in it.

You know as well as I know that the majority of Britons would vote NOT to stay in the EU - apart from trade agreements. It is for this reason that the powers that be have, for decades, resorted to all manner of lies and trickery to avoid a referendum on the issue of continued membership in its present form. Scandalous.

The EU is undemocratic. I and the majority of Britons do not want to be a part of "Total Union". A trading union perhaps, but not political and monetary. The authorities know this and thus have used every form of trickery to avoid a vote on our continued membership as it presently is. We want out - and especially of the "human rights" act, which protects criminals ahead of victims.

David - Well, the EU is run by diplo-bureaucratic compromise mainly, largely by national executives. That's not as undemocratic as it could be and arguably not disastrous if we're only talking about 1% GDP budget and managing the market.

The eurozone's management, however, is basically a bureaucratic tyranny. It has ungodly things like reverse QMV, a completely unaccountable ECB (with a brain-dead ordoliberal mandate), and German pols busy scrutinizing your budget before you do (Ireland) and conspiring to topple your democratically elected prime ministers (Italy). To not speak of Greece (referendum rejection, budget Commissar proposal...).

Arthur, the idea of a trading community without politics is incoherent. Achieving a single market requires detailed legislation, which was agreed through democratic institutions. You can of course have trading agreements without democracy, e.g. the WTO, but it doesn't work well. The European Convention of Human Rights was established by the Council of Europe, which is a separate organisation and not part of the European Union.

CJ, I think your characterisation of decision-making in the EU is a bit of a simplification. The extent to which bureaucrats and diplomats negotiate deals is similar to the behaviour of national bureaucracies and is under control by elected politicians. There is of course much more to be said about the management of the eurozone but I think that deserves a separate post later.

Great post! The incoherences of UKIP and others like Hannan must be highlighted at all costs. Sadly their airhead populism has a growing audience amongst those who want simple answers to very complex questions. Please keep up the good work.

In solidarity from a Cornish autonomist and committed federalist.