Liberals in literature and films (7) 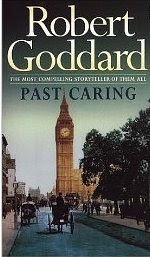 Firstly, the answer to Liberals in literature and films (6) was "Trouble with Lichen" by John Wyndham.

Now the new one. "He was Asquith's new blood in the Home Office"..."A man by the name of Strafford. But that's literally all I know of him - a few years of office, then nothing..." I hope that phrase won't be heard again.

This comes from the opening pages of Robert Goddard's "Past Caring", the first novel by John Major's favourite author, which goes on to explore what happened to Strafford.
Posted by David at 11:43 pm